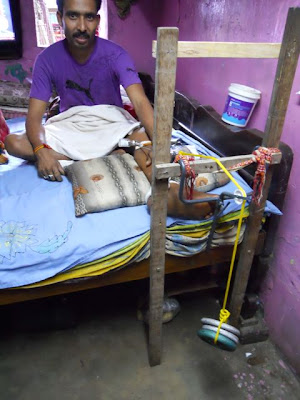 We met a little girl in the streets and became friends. She took us to her home in the slums where her father was in traction (created by loving hands at home) and recovering from an auto accident. 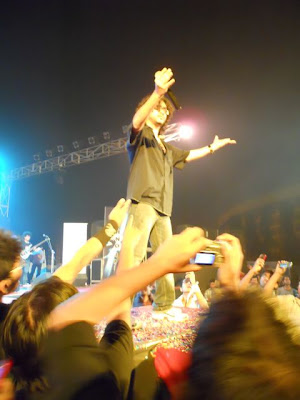 One of the funniest things that we experienced were the nightly (hard) rock concerts down the road from our stadium hotel. Kata, Jeetin (artist from Bangalore) and I got invited in to the VIP area (to prevent me from dancing with the crowds outside) 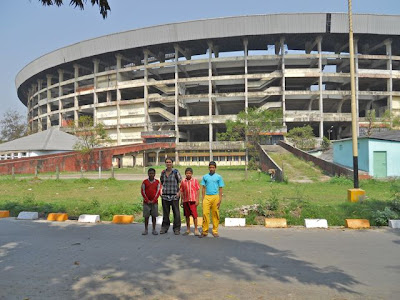 Believe it or not, our "hotel" was housed beneath this crumbling stadium
in Kolkata. There were cockroaches 2" long and rats that regularly scurried through the halls, but we had private rooms with air conditioning and hot water! Home sweet home! 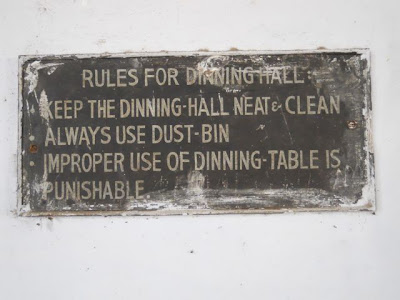 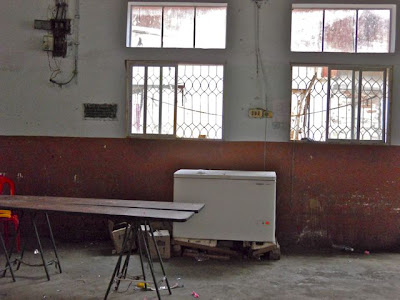 The dining room... by the end of our week in the stadium, the environmentally conscious artists from Orissa had cleaned the room, painted the walls with lively designs and installed a sculpture that hung from the ceiling.
February 16, 2010 --Kolkatta

The train journey from Shantiniken to Kolkatta was 3 1/2 hours long and was highlighted by a dance through the train cars by Kata... the local passengers looked at us (her dancing, me filming) with surprise and smiles. It got more raucous when she did a dance over and around the seats filled with Art Karavan artists... good fun.

Our new quarters for the week are under a HUGE STADIUM in the Salt Lake section of Kolkatta... like the catacombs...numerous rooms and dormitories tucked along the circular hallway surrounding the stadium. However, our rooms are AIR CONDITIONED and relatively clean with western toilets and hot water! Can’t beat that! (Although some of the rooms host swarms of mosquitos and some huge cockroaches and there are a few rats scuttling down the hallways).

My room’s terrific because I’m by myself and can snore in solitude without worrying about disturbing any roommates. Kata has a room on the exterior of the building, however, and the mosquitos can’t be kept out. (So I am now sitting in her “new” interior room while the resident repairman hacks up the doorjamb trying to fix the slide bolt so she can lock her door. Of course this comes after the two electricians who were in to install lights in the bathroom....and they are working on getting us some mosquito nets... ahhhh! all in a day’s work!)

Last night after we arrived we took a walk with our Bangalore artist friend Jeetin. At the end of our road was not only a wedding in full swing, but also a techno-rock concert! It was tough to decide which one to crash, but we opted for the concert. However, it was for college students only and they wouldn’t let us in (hard to believe... TWO white females!! and they won’t let us in!?!?)

So we stood outside the gate and I began to dance... soon I was dancing with 20 or so college boys (Kata was hiding behind Jeet)... and before we knew it, one of the Security Guards came over and asked if we’d like to go into the concert (yes, we would, thank you!) He led us around to the VIP area right in front of the stage. The music was BLASTING! and I enjoyed it thoroughly... dancing and taking photos. The band’s name is “Fossil” and is “the BEST techno-rock band in Kolkata,” we were told... It seems that there will be another concert tomorrow night week and we, of course (now that we have established our reputation) are invited to it along with as many of our friends as we desire.

Time has slipped away from me today.... it’s already 3 pm and I’ve done very little. (Kata went out for a walk and some random man on the street exposed himself to her)... The repairman is finished, so I think I’ll head out into the streets myself...
Posted by Carol Hummel at 12:45 AM