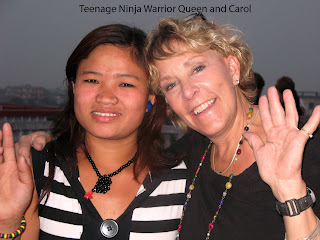 On Monday, November 17th, my silent world was invaded by eight teenaged “circus girls” from . A “circus girl” is someone who was kidnapped or sold into the Indian circuses where they were forced into performing (aka child labor) in the circuses while being abused psychologically, physically and/or sexually by cruel circus bosses. Saving these children and returning them to their native is one of the main missions of the Ester Benjamins Trust for whcih that I am currently volunteering.

So eight of these “poor waifs” were sent to be incorporated into my oasis of silence and, let me tell you, these girls are some tough cookies! Susma, Priya, Mamta, Sita, Indu, Bunnu, Sunita and Pinkey, are all around the age of 16 and are dark brooding, muttering, eye flashing masses of female rage (or so I first thought). Daggers flew from their eyes aimed directly at mine when I cheerily called out “Namaste!” No smiles.

So I left the lively teens to their own to get settled into the house next door and enjoyed a reunion with two volunteers from who came along to escort the girls and visit Bhairawa for several days. I nervously asked them about the new girls and they confirmed that there could indeed be some problems in behavior and attitude in this group. Great! I’d just settled into a fun, happy, energetic routine with my 22 deaf mosaic artists and now we were being invaded by teen angst! Ughhhhhhh!

And then Jill came up with a brilliant idea to integrate the teens – a dance! (Although I wondered if the deaf kids would be able to hear and, thus, dance in rhythm, I realized that MANY people who CAN hear the beat don’t appear to incorporate it into their dancing.) Jill said that Bunnu and Pinkey, the two toughest looking of the bunch, were the best dancers and that we should ask them to teach all of us. Before dinner, Jill made the proposal to the kids. She reported back at dinner: No way. Aint’ happening. Ever the optimist, I thought I’d just charm them into accepting our request. And then Pinkey entered the kitchen.

We usually sit on our chair “thrones” at a small table to eat while the girls eat on mats on the floor. Tonight, however, we were on the floor and – most appropriately -- Pinkey took her throne. “Teenage Ninja Warrior Queen,” I muttered, eyes wide in fascination. Pinkey had tied a wide white and black scarf around her head. Her thick black hair spilled over the top in the front and flowed down her arms and back as she assumed her fighting posture – sitting in chair, elbows on knees, shoulders up to ears. She immediately began shoveling rice into her mouth with her right hand. With each scoop, she shot a glare around the room. Her eyes actually “flashed” with defiance (just like in the movies!) “Whoa!” I whispered, “isn’t looking good for dance lessons.”

But, what the heck, might as well give it a go!

Tried compliment: “I hear you are a very good dancer.” FLASH, angry glance.

Nice request: “We’d really like you to teach everyone to dance.” FLASH, BOOM. “NO!”

Whining flattery: “Oh, come on, puleeeeeze. You and Bunnu are the best dancers here!” CRASH, FLASH. “I said NO!”

Lunacy: I jumped up from the floor and began dancing Nepalese fashion around the kitchen. Everyone broke into laughter. Ninja Queen jumped up from her chair almost spilling her plate and ran toward the hallway. Silence. As she exited the kitchen, Pinkey paused, turned, took a Warrior stance and said. “OK, I teach you.” And SMILED!!

Shouts of joy and applause followed the Teenage Ninja Warrior Queen down the hall and into her lair.

The dance was a huge success. Bunnu and Pinkey began the party by doing complete choreographed dance numbers straight out of Bollywood. They are GOOD! A couple of us tried to mimic their undulations but the music was much too fast. One of the deaf boys jumped in and danced perfectly in synch with Bunnu (must be on a music video).

After the performance they tried to teach some steps but most of the kids were too shy. It felt like a junior high school dance; girls on one side, boys on the other all clinging to the walls. Finally, the four volunteers got on the dance floor and we made such fools of ourselves, that some of the kids joined in until critical mass was reached and the rooftop erupted in non-stop dancing, clowning, and video-taping.

It was SO MUCH FUN! By the end, the kids were dancing and joking around and requesting photos with no regard to who could hear or speak, who was from or Bhairawa… they were just teenagers having fun on the rooftop as the mosquitoes descended along with the sun.