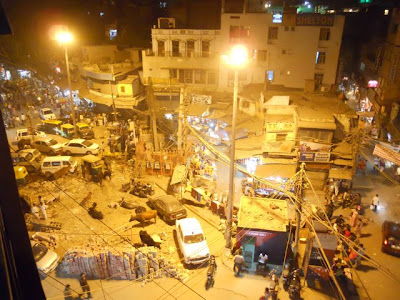 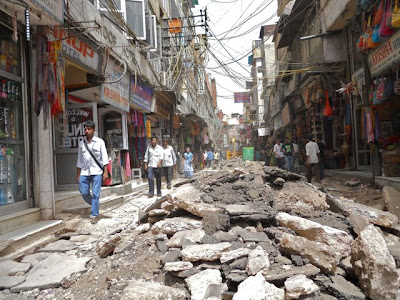 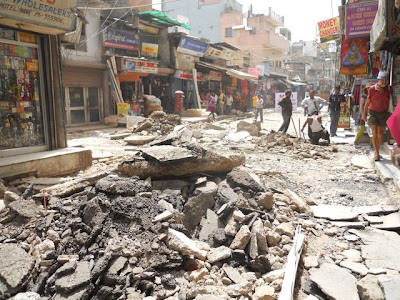 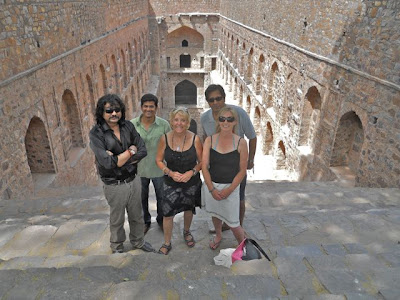 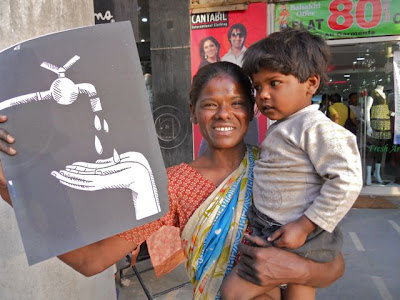 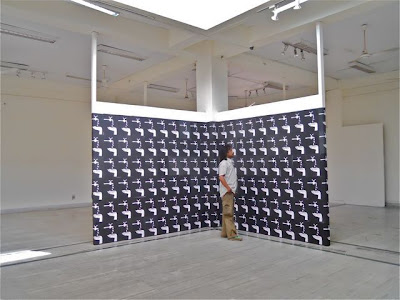 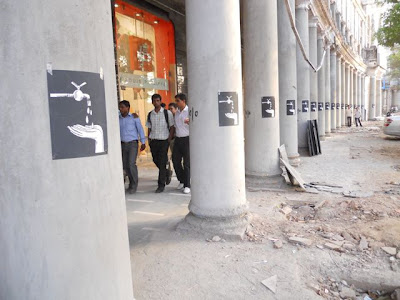 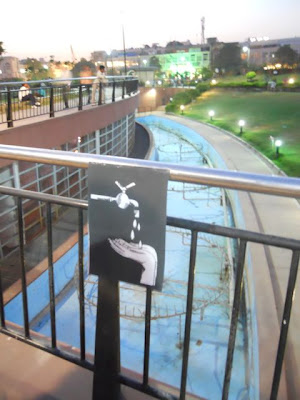 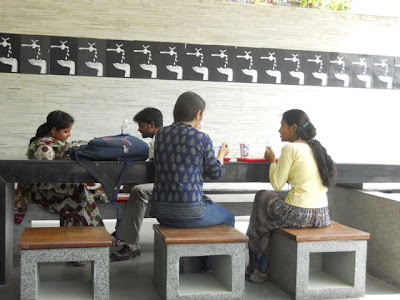 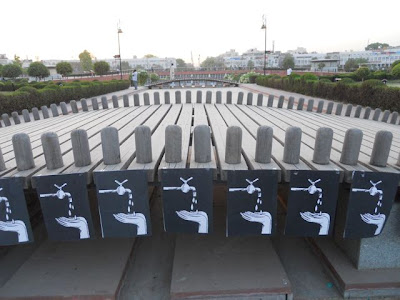 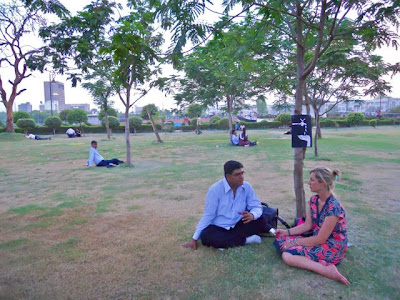 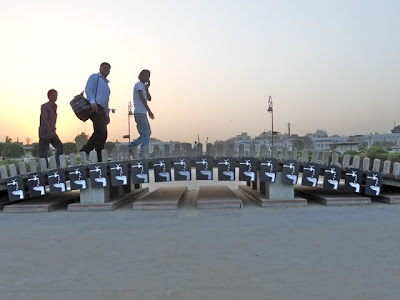 So Art Karavan Internationl has come to an end.... The final four "shows" weren't as spectacular as expected, but the last one at JNU University was nice.

The first one was supposed to be big deal but then we found out that not only were there TWO holidays on that day, but the students at the college were in exams and the campus was EMPTY... also the Prince of Saudia Arabia came to the college in the morning so we were banned from the campus .... Anna and I put up a good display of our Pani Bachao! (Save Water) posters, photographed them and then left... didn't go to day two "show" because we were working on the water project all day despite temperatures of around 110 degrees...hung loads of posters at Connaught Place (main shopping area), met a dentist who gave us a nice water interview, and hung more posters in the park.

The third "show" was a reception, but the final show was in a valid gallery at JNU run by an efficient woman. Anna and I did a nice installation and did a bunch of water conversations and songs with students and people at the opening. Many of the Art Karavaners did performance pieces. Only problem is that my plane was due to fly out that night but THE VOLCANO was threatening to cancel my flight to Belgium. So, I reluctantly said "good bye" to all my Karavan friends and we left early to find an internet to see what was going on with the flights.

Because of the volcano that blew in Iceland several days ago and the resulting ash plume blanketing Europe, all flights were cancelled to Europe, mine included. The next day Anna was due to fly out and, again, all flights cancelled. During the next couple days, we worked on the internet trying to find alternative flights. Anna's first available flight to Amsterdam on KLM is April 30th!! Jet Airways first opening for me to get into Belgium is 29th and I'm scheduled to leave Belgium on the 30th! Soooo, I decided to cancel the Belgium leg of my trip and fly straight home on the 29th/30th.

Not bad to extend our Indian adventure for a couple more weeks EXCEPT it's about 125 degrees in Delhi! We had fantasies of going to Orissa and the beach until we found that it's a TWO DAY train ride both ways, so not feasible to go.... So our new plan is to go to Jaipur (the Pink City) that we visited 5 years ago... still hot like there but at least it'll be a change of scene as is only 5 hours away... AND we're definitely going to get an air conditioned room this time!!

Went to see the to new Hindi "Ghost movie" --Phook2 -- today at the cinema .... our cute little 22-year-old waiter at the restaurant asked if we would go with him, luring us in with the air conditioning and BIG screen" and "comfortable chairs".. didn't realize that he was really asking ME (or Anna would have been a fine fill-in...not selective, I'm sure) to go on a DATE with him (hahhaha!) until he tried to pay for our tickets and then clung to my arm (during the scary parts, of course) and kept sneaking his head onto my shoulder during the movie. I gave him a bracelet later at dinner (he, now in his waiter guise) making him my BROTHER to establish our relationship (plus we're leaving in the morning for Jaipur).

Other than that, they've now brought in a large backhoe and completely ripped up the road we live on... simultaneously bunches of Indian laborers are chipping off the fronts of a bunch of buildings (using chisels and hammers).... it's like a war zone... brick falling all around, dust is unbelievable, conduit and waterlines ripped to pieces.) Most places would have closed off the entire street, but tourists and locals continue to climb through the rubble and go about their daily duties

On the way home last night I got clipped by a bicycle rickshaw... two small (but bloody) cuts on my arm... ripped off my new bracelet (but, thankfully, we ran back out on the street and found it)... keeping antibiotic cream on it, so should be OK

I've been wearing the same outfit for the past two weeks (my black skirt and tanktop)... only thing that I don't broil in... have to wash everything each night, but the clothes certainly do dry in a jiffy!! I'm sure we're scandalous to the locals (who are still wrapped in saris, scarves, jeans and longsleeved shirts) but WHO CARES!?!? It's HOT here!! ...never, felt anything like it...

Each day Anna and I have grand plans and then wilt within a couple hours on the street and retreat to our room or a bar to cool down... During the nights we each get up a couple times to stand under the shower for a bit to cool down enough to sleep...
Posted by Carol Hummel at 3:18 AM