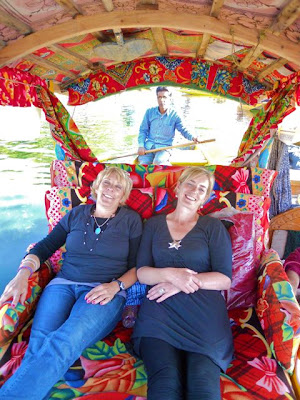 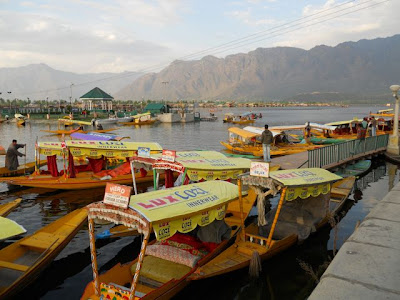 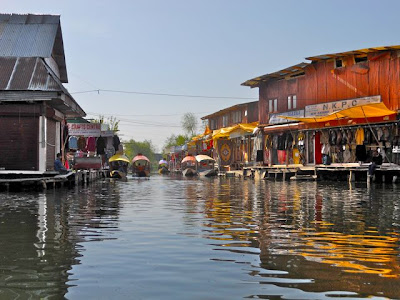 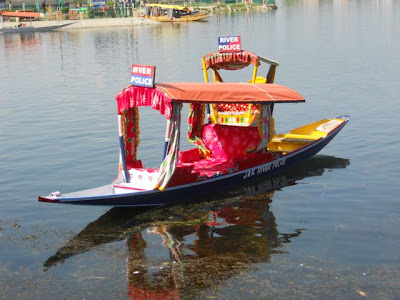 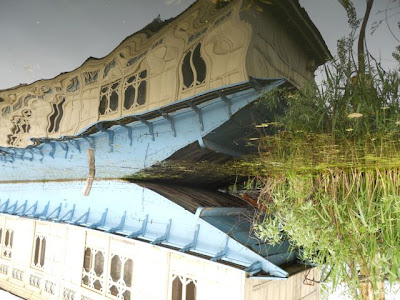 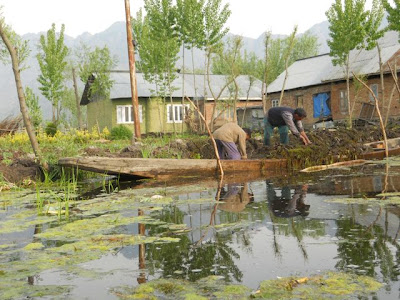 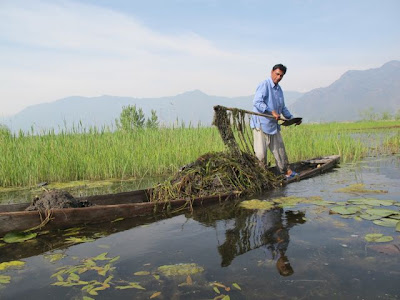 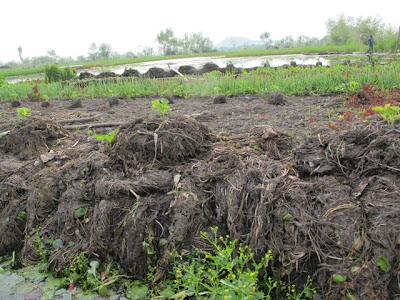 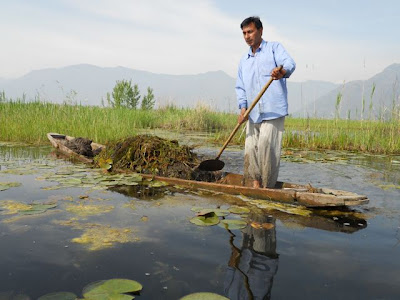 The naturally occurring floating platforms of vegetation are utilized by the lake people on Lake Dal. The gardens are formed by harvesting vegetation from the lake body and mud from the bottom of the lake. this forms a surface upon which the farmers can plant their seeds.

A base layer of vegetation is harvested by boat with a long pole and the soil harvested from the lake bottom is piled up to dry before spreading over the compost. Mounds are created into which seeds are placed. These seeds are saved from the previous years harvest. Some years ago, a German woman brought seeds from Germany which were intended to suppress the naturally occurring vegetation and aid cultivation. One unforeseen result was the inhibition of the growth of lotus roots which are an important staple to the diet of the people in the lake community and a source of income because they harvest and sell the lotus roots. The local farmers were very annoyed and are now rightly suspicious of imported seeds. Thus they continue to use seeds harvested from the previous season.

The lotus plant yields both root and nuts after the flowering season. The stems and leaves can be made into necklaces due to the strength of the fiber of the stems.

The vegetables growth upon the lake are growth both on the floating gardens and on gardens cultivated on the islands on the lake. This is an important economy for the people of this area because the food is locally produced and harvested and sold and remains an economic industry. There’s one road over the mountains leading to Srinagar. Because this is a highly militarized zone access is slow and expensive and gets closed off by snow at times. Thus, dependence on local vegetables is essential for this area of Kashmir.

The importance of the lake, which sustains 100,000 families including 12,000 people living on the houseboats, cannot be underestimated. It is a source of livelihood for the local inhabitants as well as being a major tourist destination. In recent years the level of the lake has decreased due to climate change, shorter rainy season and less snow in the mountains.

A bout three years ago, an advisor to the local government suggested that the root cause of the decline in water table was due to the trees on the lakes and surrounding banks and islands on the lake. Despite local protests from the Houseboat Association and local inhabitants, the government sent in tree fellers supported by soldiers and cut down every tree on the lake. It made no difference to them, but deprived the populations who are reliant on boats mooring places for their boats as well as shade. In addition, it most probably contributed to soil erosion.

The new growth can be seen all over the islands on the lake but the juvenile trees are still unable to provide shade in the summer months. It is now accepted that climate change, not trees, is the cause of the change in water level. (The guy in charge of the project died before it was completed....baaaad kharma)

In the winter when the water level rises, the farmers move their produce to the floating garden which rise along with the level of the water. (The new trees are helping keep the soil in place during the flooding...duh!)

In Ayub’s grandmother’s time, children were forbidden to go out alone at night on the lake due to the belief that the singing lake angels (that are headquartered in the shrines at opposite sides of the lake) would spirit away the children.

A wide range of produce is grown on the lake including pumpkins, radishes, carrots, mustard, onions, greens and other local vegetables. The produce is sold at the water and land markets.

All local traffic is undertaken by boats known as shikaras. All goods are carried back and forth as well as people, animals. School children paddle themselves to shore to attend school. Parking is free and unrestricted. Some commerce exists upon on the lake in the form of floating platforms of canteens which sell everything from freshly made food to meat to cloth to beauty parlors. and drinks as well as boats acting as local grocery stores. It is a very self-sufficient and sustaining community.

Everyone on the lake is Muslim with 10% being Shia Muslims. Despite the conflict, day-to-day life seems to go on on the lake free from the harassment of the military. The young men of the community stay on the lake at night for reasons of safety as there is the largest concentration of military presence in all of India (700,000 soldiers currently) billeted in the Jammu-Kashmir area (??) at this time.

Because it’s a tourist destination, the inhabitants of Lake Dal are relatively safe from harassment from the military while on the lake or in in the “Tourist Zone”.

It seems like the Indian bureaucrats have little understanding of the needs and wishes of the population of Kashmir. It is said that the bureaucrats have a Delhi-London mentality. For instance, in former times there were a number of gates or exits from the lakes which meant that when the snowmelt comes down from the mountains to the lake the fresh water would flush out the collected dirt and sediment and pollution through these exits. These waterways have now been closed through insensitive and unbridled planning and development on the lakeshore and waterways sealing the lake so that the annual natural cleansing process cannot occur.

It seems that the failure of planning along water bodies is a global phenomenon. Despite the rising levels of pollution and entrophocation (sp??) on Lake Dal, there is still a vibrant wildlife population including Kingfishers, Kites, pigeons, frogs, otters, pomfrets and other birds, dragonflies, many species of ducks exist on the lake and some provide additional sources of food for the local people. (Roast duck is a specialty in the winter) Lake Dal is still a stop-off point for many migratory species of birds.

Many of the young men from Lake Dal take seasonal work in other parts of India such as Goa, Delhi and southern India. This is partly a necessity because of the falloff of tourism due to the recent continuing conflicts in Kashmir.

The British created the houseboat culture when they started building houseboats on a nearby river; when that became too crowded they moved onto the body of the lake.

Some years ago, an official from central government came to assess the conditions on Lake Dal. She observed the generation-oil tradition of harvesting the pond plants and using them as compost on their floating gardens. She decided that this practice was damaging to the environment and insisted that the local population on the lake cease harvesting the pond plants. This, she hoped, would help improve the quality of the water. In fact, the farmers on the lake suffered a deficit of material to compost having only the canals between their houses as a safe place to harvest. Culprits who were caught harvesting on the lake body were imprisoned for short periods of time.

After two years, the official moved on to fresh fields and life on the lake returned to normal.

The next official to arrive and assess the conditions on Lake Dal decided that the water quality was being effected by the profusion of water lilies on the lake. Despite local wisdom as to the positive qualities of water lilies and the delicate ecosystem that exists between the various species of plantlife that live on the lake.

Waterlilies are a source of food both the root and the nut from the flower are relished as delicacies. The leaves provide shade for the fish and support an entire ecosystem of insects and small amphibians. A special machine, something like a combine harvester, was imported by the local government to pull up all the patches of waterlily to be found on the lake surface. This initiative did not improve the quality of the water on Lake Dal and soon after the policy was reversed in recognition that indeed the waterlily is a vital element of the ecosystem of the lake.
Posted by Carol Hummel at 2:58 AM