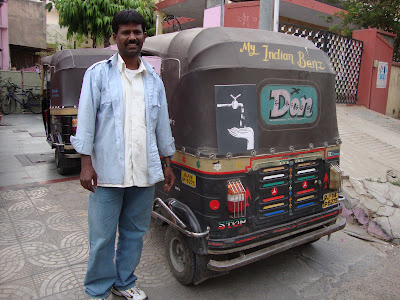 Rickshaw driver extraordinaire Lala was a wonderful asset to our Paani Bachao! project.... if you need a rickshaw driver you can depend on, call him at (91)9829458283 and say "Paani Bachao!"... you won't be disappointed! 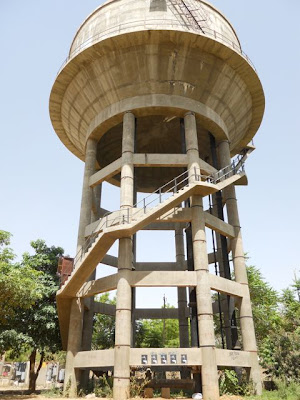 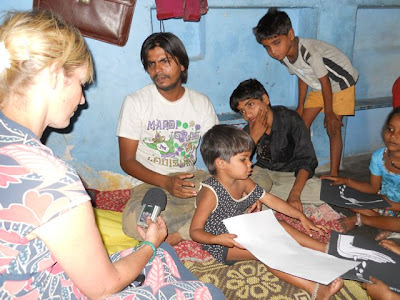 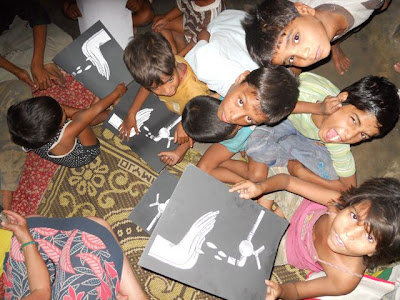 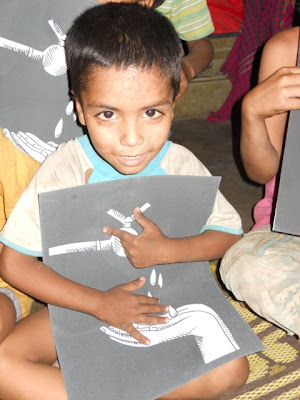 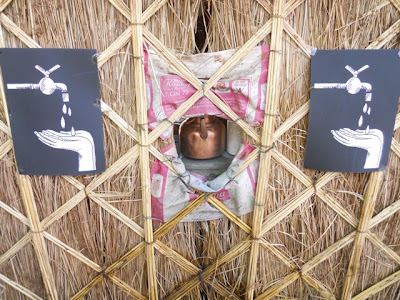 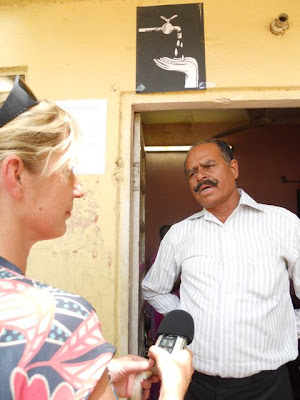 Two artists from two countries with one cause: Pani Bachao! (Save Water!)

Anna (Macleod of Ireland) and I worked on our Pani Bachao! project yesterday and, I must say, it was a BIG success! After a bit of a tussle with the rickshaw drivers (attempting to get one to commit to 200rs --$4 -- for 4 hours as advertised instead of 250rs, we set off to hang posters and have water conversations in Jaipur. (The rickshaw driver -- Lala (nicknamed by some French travelers) -- turned out to be a WONDERFUL asset to our project and we recommend him HIGHLY.... if in Jaipur, call Lala at (91)9829458283... greet him with "Paani Bachao! and you won't be disappointed!)

First, second and third stops were at various water plants in the city. EVERYONE was extremely enthusiastic about Pani Bachao! (or maybe the fact that two blondes were doing it) and at each stop we drew large crowds. Our rickshaw driver got into the spirit immediately and served as a translator for the Hindu-speaking water officials.

One interesting point we discovered is that in the posh areas they have small straw huts manned (by children) who dole out drinks free of charge from a copper teapot situated in a small window in the hut to any and all passersby. In the poor areas, though, no such huts.

After three water plants we were a bit "official-ed" out and had our driver take us to a poor neighborhood to talk about water. He took us to a neighborhood of 5,000... a maze of interconnected mud huts along zigzagging alleyways... to talk to "the king" of the neighborhood (a 24-year-old resident whose main claim to fame is that he's traveled to quite a few countries -- France amongst them...and is now going to Japan is 8 days to perform music and sell his handmade puppets...300rs for a pair)

After we traversed the winding path deep into the bowels of the community (stopping often to chat with enthusiastic residents who wanted their photos taken) we arrived at his 2-room hut and we, along with a dozen or so children, crammed into the living room to talk about water. The kids instantly got into the spirit of Pani Bachao! as Anna handed out posters for them to hang in their houses. Our host told us about the problems the community faced getting enough water to function. Although the officials had told us that each person gets 1.5 liters of water per day (not a lot!! not enough!! for drinking, cooking and washing!!) he said the reality in his community is that the water is "turned on" each morning for 1 1/2 hours and the daily battle for water at the pumps begins. The people try to get their daily share but, we suspect, many fail during the short period of access.

Other interesting points: A lot of NGOs come to the neighborhood "to help" but, our host says, accomplish very little for the people and, he suspects, make loads of money for someone else.... not a big fan of the fair-weather do-gooders.

"The king" also called in some friends and treated us to a rousing Rajasthani water song. I gave friendship bracelets to our hosts and the kids and we purchased a puppet each (150rs each) as "thank you" to our host. (Apparently many in the community are involved in the production of Raj puppets as we saw people working on them throughout the neighborhood...very nice quality)

By the time our visit came to an end, Pani Bachao! was the cry of the neighborhood and the kids marched behind us with their posters chanting "Pani Bachao!"
Posted by Carol Hummel at 8:36 PM